Demand pressures on London’s healthcare system have grown steadily this quarter, with increased GP referrals to specialists, delays in A&E and delayed discharges due to lack of social care availability. Air pollution showed signs of improvement, with all pollutant concentrations lower than the previous year, and particulate matter dropping below WHO limits.

These figures show demand pressures on London’s healthcare system have steadily increased in the second quarter of 2018, as the number of day case patients referred to hospital by their GP rose.

In the second quarter of 2018 there were 600,000 referrals from GPs to outpatient clinics. When adjusted for working days and population, this figure showed little change (- 0.4 per cent) on the same period the previous year.

The NHS received a £20 billion cash injection in the recent 2018 budget, with mental health spending increasing as a share of total NHS spending over five years. The announcement represents the largest boost to healthcare spending since 2010, though the extent to which it will remedy previous cuts has been questioned by industry experts.

London hospitals have, on average, missed the four-hour accident and emergency attendance target for the past three years. Whilst London performed marginally better than the rest of the country in the third quarter of 2018, 125,000 patients (10.5 per cent) remained unseen within four hours of arrival. The four-hour standard was set by the government’s mandate to NHS England, that pledged at least 95 per cent of patients attending A&E should be admitted to hospital, transferred to another provider or discharged within four hours.

Despite seasonal variations – with winter seeing increased demand – London hospitals failed to improve on last year’s performance in the third quarter of 2018, with an increase of 0.6 per cent in the number of patients not seen within four hours on the same period in 2017. Though major emergency departments that provide a consultant-led 24-hour service accounted for just over half of attendances in Q3 2018 (55 per cent) they saw the majority of waits over four hours (95 per cent). The colder winter months expected ahead look set to increase pressure on the capacity of London’s hospitals.

The number of days of ‘bed blocking’ resulting from delayed discharge was 20.7 per cent lower in the quarter to August 2018 than in the same period in the previous year. However, there were increases compared to the previous quarter.

Delays attributed to social services have bucked the previous downward trend, increasing 10 per cent in the three months to August 2018 when compared with the previous quarter, though remain 35 per cent below figures from the previous year.

Despite seasonal variations in the concentration of pollutants – with the colder winter months seeing the steepest increases, concentrations of particulate matter and Nitrogen Dioxide (NO2) have been decreasing overall. Though the downward trend in roadside pollution showed signs of reversal in September 2018, concentrations remain lower than the previous year.

Roadside levels of particulate matter – PM10 and PM2.5 – continue to sit below WHO limits, falling 2 per cent and 20 percent respectively, in the year to September 2018. Concentrations of NO2, however, have crept back up in the last month, though remain 3 per cent lower than last year.

Recent research found cars and vans create £6 billion in public health costs per annum, with figures highest in central London. The capital’s air quality continues to rise up the political agenda, with the introduction of the Ultra-Low Emissions Zone in April 2019, and proposals for parts of the capital to become zero-emissions zones by 2022. 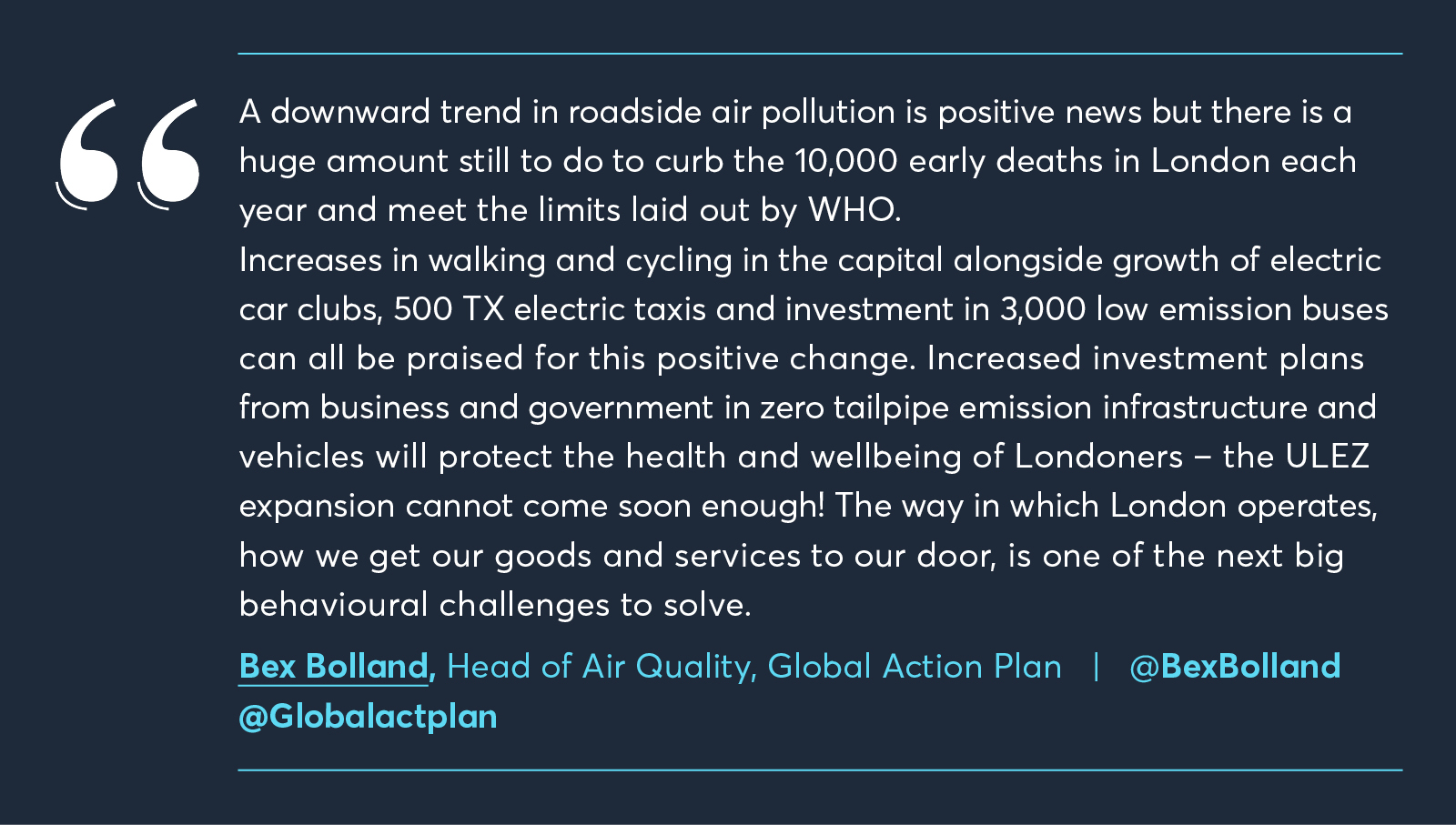