In recent years, London has played an increasingly important role in hosting the headquarters of multinational corporations (MNCs) – yet this aspect of London’s commercial activity has been somewhat understudied in comparison with its role as a centre for global tech, finance and creative industries. This is partly because headquarter (HQ) location choice is usually a secretive process, 1 and partly due to the diverse range of functions that can comprise “HQ activities”.

Nonetheless, the decisions of large businesses play a major role in shaping cities, and the public debate over how headquarters should relate to their cities has also intensified. As technology multinationals have grown tremendously in size and value, their monumental headquarter investments are attracting attention. Amazon’s HQ2 public auction and Apple’s new HQ in Silicon Valley have rekindled debate about using public budgets to attract headquarters: some in US cities see them as a lifeline, others as a mixed blessing. 2 IBM 3 and Adidas 4 have expanded their regional HQs in Shanghai this year, and Alibaba is now transitioning to a two HQ model, in Hangzhou and Beijing. 5

London has also attracted new corporate temples as Bloomberg, Facebook and Google have made very large investments in new central London offices. However, Brexit has brought into question London’s position as a centre for European HQs: the location of multinationals’ offices has featured heavily in Brexit debates, and in the press every headquarters, move becomes “about” Brexit.

This report seeks to better understand London’s current HQ economy, its impact on London, how it has developed to date, the risks that it faces, and how policy should respond to these. This introduction first surveys London’s success as an HQ location – both through a review of recently reported locations in, and relocations from London, and through analysis of longer-term trend data on London’s performance.

Brexit has brought about a wave of stories relating to the relocation of global and regional headquarters into or out of London. Perhaps unsurprisingly, the picture is much more complex than the headlines may suggest. There is a huge variation in HQ activity amongst businesses of different sizes, sectors and countries of origin. Whereas London is experiencing decline or uncertainty in some areas, it appears to be thriving in others. Some examples of the different types of “HQ stories” about London are included in the case studies below.

Moving into London from out of town:

Companies not coming to London

These much-publicised moves should be seen against a backdrop of considerable success. London has a long history as a location of choice for global corporations’ head offices, yet data suggest that this trend has recently intensified. New and converted office landmarks are changing the face of London’s central business districts as well as that of emerging locations such as Hammersmith, Battersea and King’s Cross.

National statistics chart a formidable rise in employment in headquarters and related functions since 2007. As Figures 1 and 2 show, there were three and a half times more jobs in “activities of head offices” in 2016 than in 2007. This trend is not restricted to London – employment in activities of head offices has risen just as fast in the UK as whole.

Some of this growth may be explained by a change in how national statistics account for staff. In 2007, the Office for National Statistics expanded its definition of “head office activities” from “employment in multisector conglomerates” to become an industry in itself. 33 But the growth in head office employment has continued since that change, and correlates with a marked increase in the number of foreign investment HQ projects into London, which is discussed further below.

Not only has head office employment boomed: so has employment in professional service activities such as accounting, public relations, real estate, management consulting and tax advisory – which typically support decision-making and senior management functions in HQs (Figure 1). Looking at the past two decades, employment in these sectors has also risen much faster than the London average (twice as fast in “accounting and tax consultancy activities”, nine times as fast in “management consultancy activities”; Figure 2). And while this professional services cluster doesn’t only serve London-based clients, its growth does suggest that London has become more specialised in servicing corporate decision makers, and that this cluster has been one of the leading forces in London’s economy.

The economic output of “activities of head offices” and “management consultancy activities” has shot up too, increasing sixfold since 1997 as shown in Figure 3 (data is only available for the UK as a whole). This increase is greater than that in employment, meaning that these sectors’ productivity has risen, an anomaly in a time of stagnating (or even falling) productivity for the UK. Output from office administrative support and from accounting and tax consultancy activities has also risen faster than the “all services” baseline, albeit less impressively and only since 2012.

The growth of employment and output in head offices and related functions is mirrored by the persistent strength of London and the Wider South East (extending from Cambridge and Oxford to the south coast) as the leading European base for the world’s largest MNCs, and by the increase in the number of overseas HQ investment projects in the region.

Apart from a few exceptions, global HQs usually remain in their country of origin – but multinational companies often set up regional offices that provide corporate leadership for a group of countries in which the company trades. While the UK’s position in global HQ rankings is eroding slowly (as more non-European companies enter the Fortune Global 500), London’s position as a centre for regional headquarters is very strong. London is by far the preferred location for non-European multinationals’ European headquarters. According to a 2018 Deloitte study, out of the 201 Fortune Global 500 companies that have a headquarters in Europe, 114 had located them in the UK, of which 111 were in London and the Wider South East. In other words, London (87 HQs) and the Wider South East (24 HQs) together accounted for 55 per cent of top companies’ European HQs – followed by Geneva (7 HQs), Amsterdam, Dusseldorf and Brussels (5 HQs each). 34 Overwhelmingly, the biggest multinationals have chosen London as their European HQ.

London is not only a major centre for existing companies’ headquarters – the city is also a great attractor of overseas investment into new headquarters projects, large and small. According to the fDi Intelligence database – which is not exhaustive but is regarded as the industry standard 35 – London was the top-ranked destination city globally for foreign direct investment into headquarters between 2003 and 2018 measured by number of projects, and third-ranked by capital expenditure (Figure 4). London hosted six per cent of the world’s HQ foreign direct investment projects – and that figure increases to eight per cent if we include the rest of the Wider South East.

Since the UK’s vote to leave the EU, London is increasingly presented as being in competition with other European cities. Nevertheless, in recent years, London and the Wider South East has continued to stand out as the leading attractor region of “HQ” FDI projects, attracting one-fifth of all those into Western European countries since 2003 (Figure 5). This is a significant flow of new investment, albeit less than the region’s 55 per cent share of Fortune Global 500 European HQs. Still, London’s attraction of HQ investments has continued at pace, against a backdrop of slowing growth elsewhere since 2008 (Figure 6).

The fDi data also suggest that nearly all HQ investment projects into London serve international markets (Figure 7) – half serve other European countries, a further 19 per cent also serve markets outside Europe (often EMEA), and 12 per cent are investment projects for global headquarters. (This excludes 20 per cent of projects where data on markets served is unspecified.) 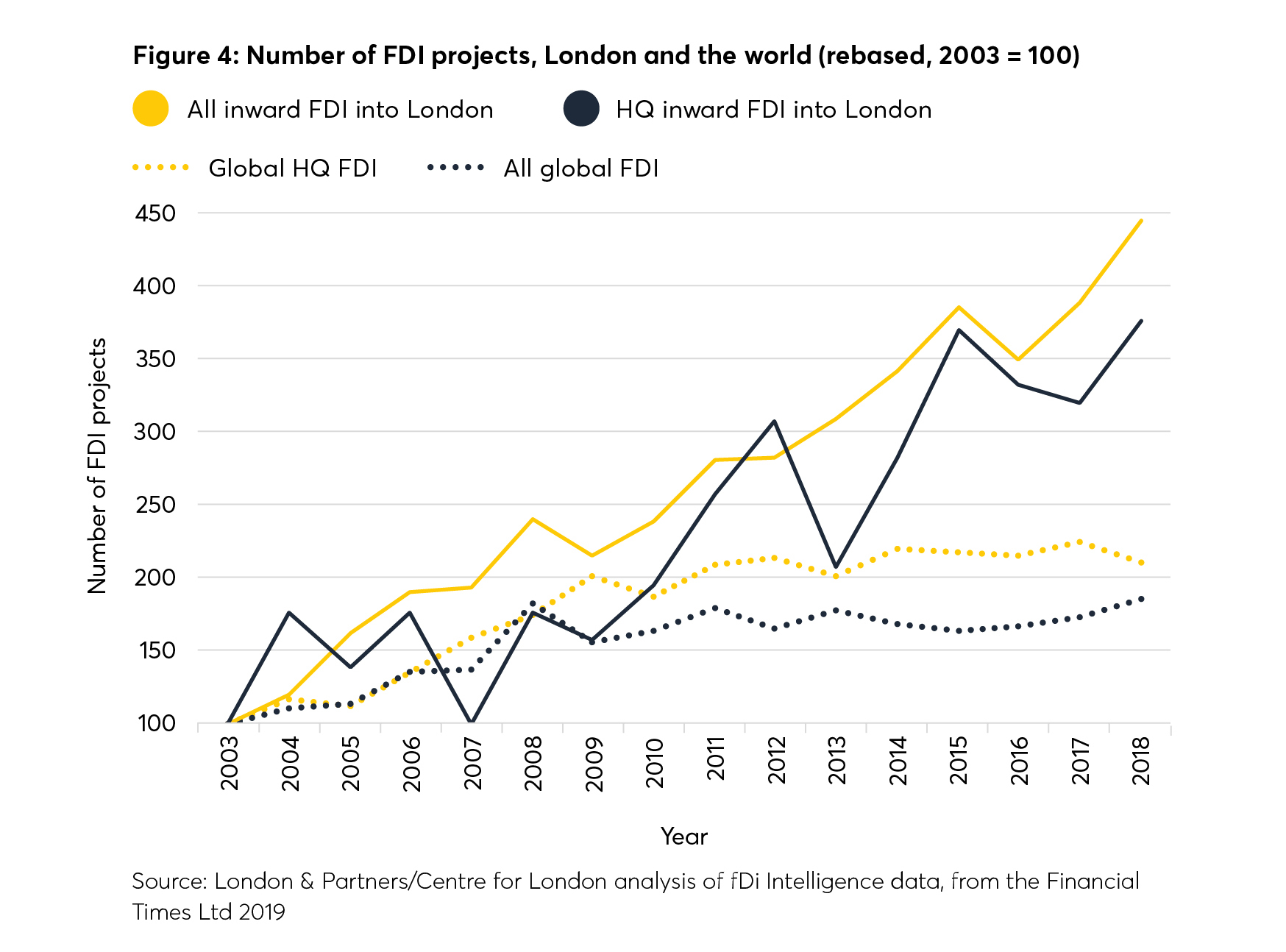 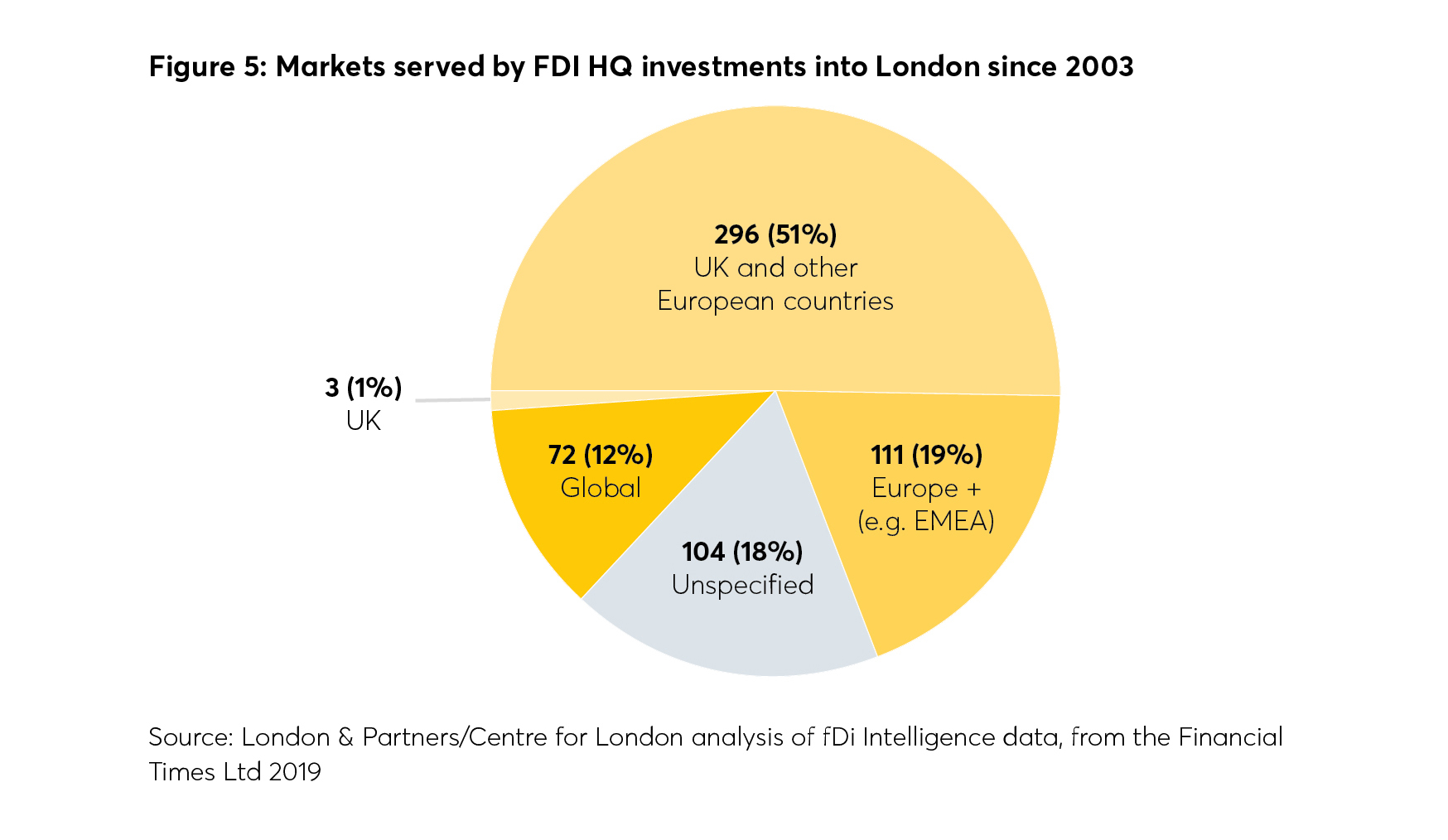 See a larger version of Figure 6 on Page 23.

See a larger version of Figure 7 on Page 24. 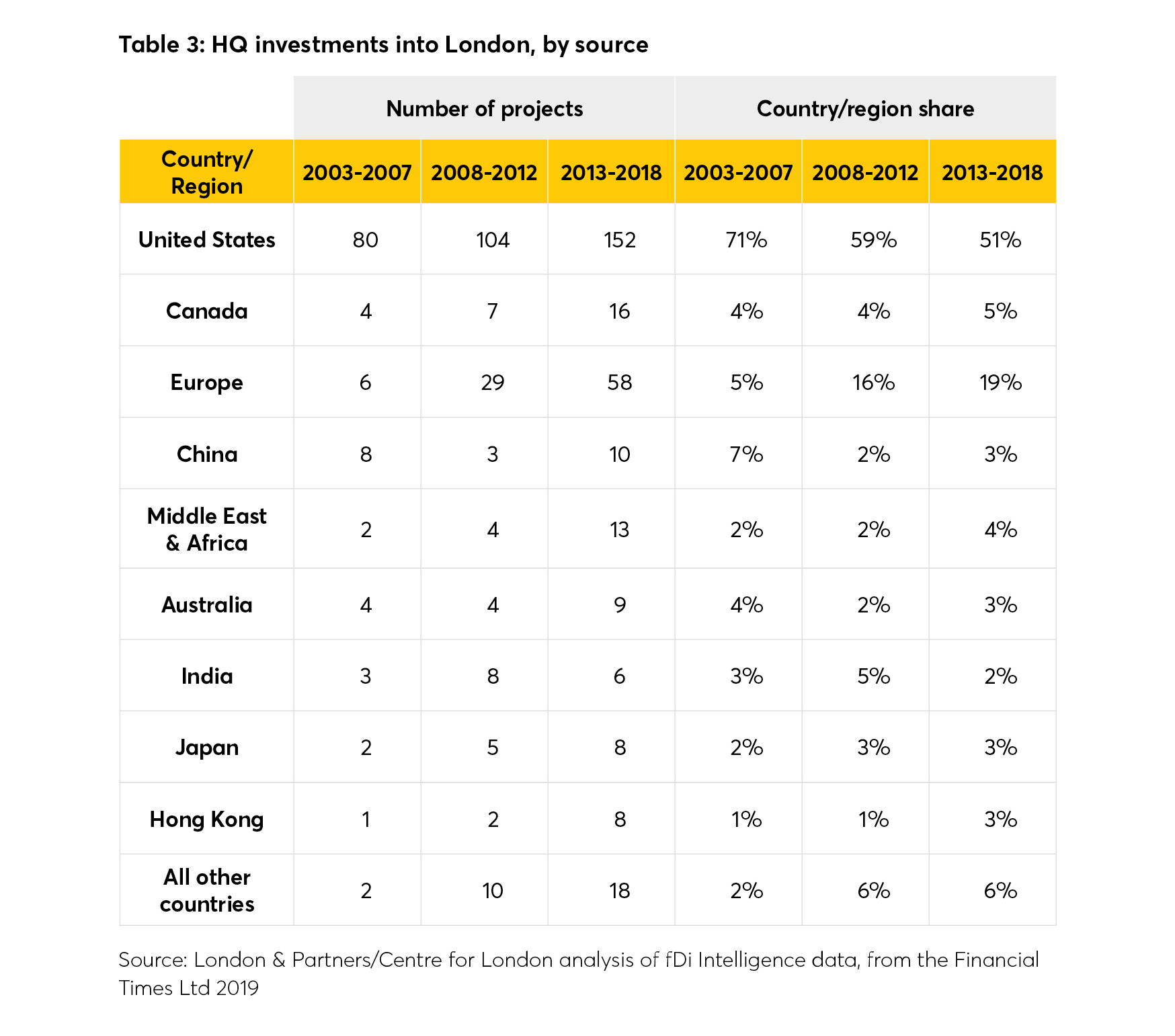 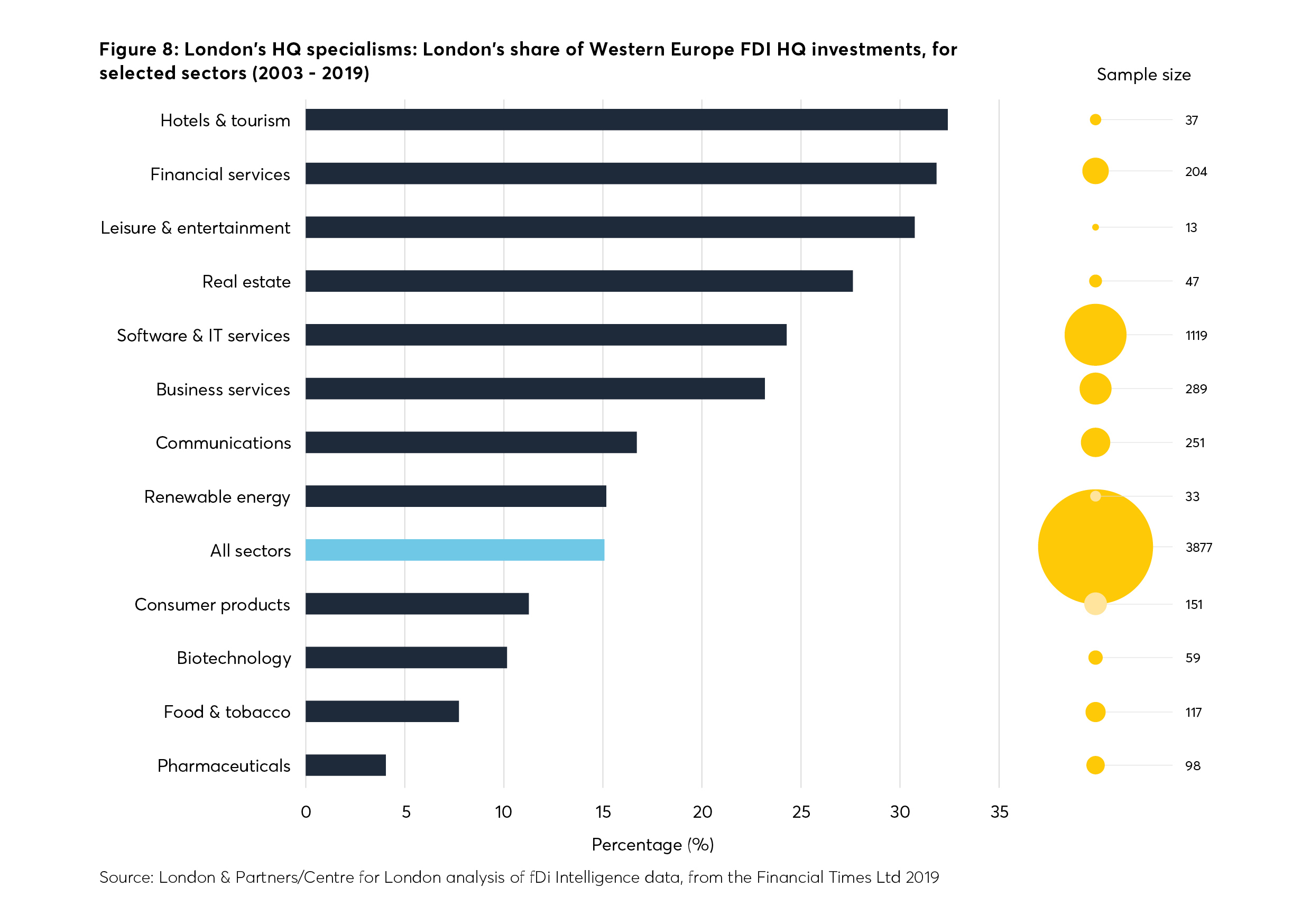 These statistics tell a strong story: London hosts 55 per cent of the world’s largest companies’ European HQs, and attracts a fifth of Western Europe’s new investment in HQ projects. But whilst these figures may inspire confidence, they only show a partial picture, and should not act as a pretext for complacency.

First, the 2018 Deloitte study reveals that three-fifths of the Fortune Global 500 top companies do not have European headquarters – though this does not necessarily mean that they don’t have a European presence. London is a hub for Europe, and to some extent for the world, but fast-expanding markets are not in Europe and it would make sense if the governance of multinational companies were to shift to the East.

Second, the data carry mixed messages for other UK cities. Only three of the 117 European headquarters of Fortune Global 500 companies are in areas of the UK outside the Wider South East (two are in the Midlands, one is in the North). That said, the fDi data show that Greater Manchester and the West Midlands are in the 20 Western European “regions” that attract the most HQ projects – and still performed better than Brussels, Stockholm or Milan between 2003 and 2018.

Third, it is worth noting that another database of HQ investment analysed by EY records a marked fall in the number of HQ investment projects into the UK, after peaking in 2015. The FT’s FDI data, which we use in this report, does not record such a marked fall for the UK as a whole, but does suggest a slowdown in growth. 36

Finally, the most recent figures for business visitors to London suggest that the city may be on the brink of less buoyant conditions for the first time since 2009. According to ONS estimates, business visits and business spend in London both fell by 5 per cent between 2015 and 2017, their first fall since 2009 – and the first three quarters of 2018 show this trend continuing.

Will the outsized contribution of HQ activities to the city’s growth continue? Confident voices mention London’s long history as a centre of corporate power and control, while others remember London before its urban and economic “renaissance”, and refuse to take the city’s attractiveness for HQs as a given.

To understand how London’s position might change, and the implications of this, we need to investigate the reasons behind the rise of London as an “HQ city” and what impact the presence of HQs has on the city’s economy.

This report charts the rise of the HQ economy in London and provides a framework for understanding the value, as well as the challenges, that HQs bring to the capital. How are headquarter functions changing? Are the criteria for their location changing too? Will HQs become a durable engine of growth for the city? Where are London’s long-term strengths and vulnerabilities, and what can be done to address these?

We draw on a mixed methods approach to answer these questions, including:

Chapter 1 defines HQ functions and describes how these are changing; Chapter 2 summarises the value and the challenges that HQs present to global cities; Chapter 3 delves into the criteria companies use in making HQ location decisions; Chapter 4 looks at the strengths and weaknesses of London’s position against these criteria; and Chapter 5 charts the implications for London’s policymakers and business leaders.