Londoners who drive also need to park – but does the current provision of on-street parking work for everyone?

Whether you’re a car-owner or not, the kerbside serves the needs of a wide range of Londoners: from people with disabilities who rely on their car to get around, to delivery drivers that need space to park to do their jobs.

Yet Londoners also want to give less priority to parking spaces on our streets. New polling commissioned for our recent report found that Londoners overall see trees and green spaces, pavements free of clutter and children’s play space as a higher priority than on-street car parking for residents and visitors. Parking provision reduces space for alternative uses that Londoners value such as pavements, and social and environmental features such as trees, benches or microparks.

In fact, our streets are dominated by parked cars. Transport for London (TfL) data shows that there are more than three million licensed vehicles in London, of which 43 per cent are parked on-street (at the kerbside) rather than off-street (in parking lots, garages and driveways). Parked vehicles take up well over 14 km2 (1,400 hectares) of space on the city’s roads and streets – the equivalent of 10 Hyde Parks. Considering car owners use so much space in the capital, are they paying their fair share?

But are they paying a fair price?

For most car owners, residential parking permits are accessible from their local council. On average, a resident permit in inner London costs car owners between £51-£230 and in outer London, between £29-£154 (Table 3).

Is this a fair price for a dedicated private use of a public space, however? There are different ways that we could consider ‘fairness’. At the least, we think it reasonable that this use should not be subsidised by other sources of income. So we calculated what parking spaces actually cost to operate. What we found was that the annual cost of operating residential parking spaces far outstrips the price that drivers pay for residential permits, with even the most expensive permits falling short. On average, it costs councils £336 to operate each parking space in inner London a year and £295 in outer London (Table 3). 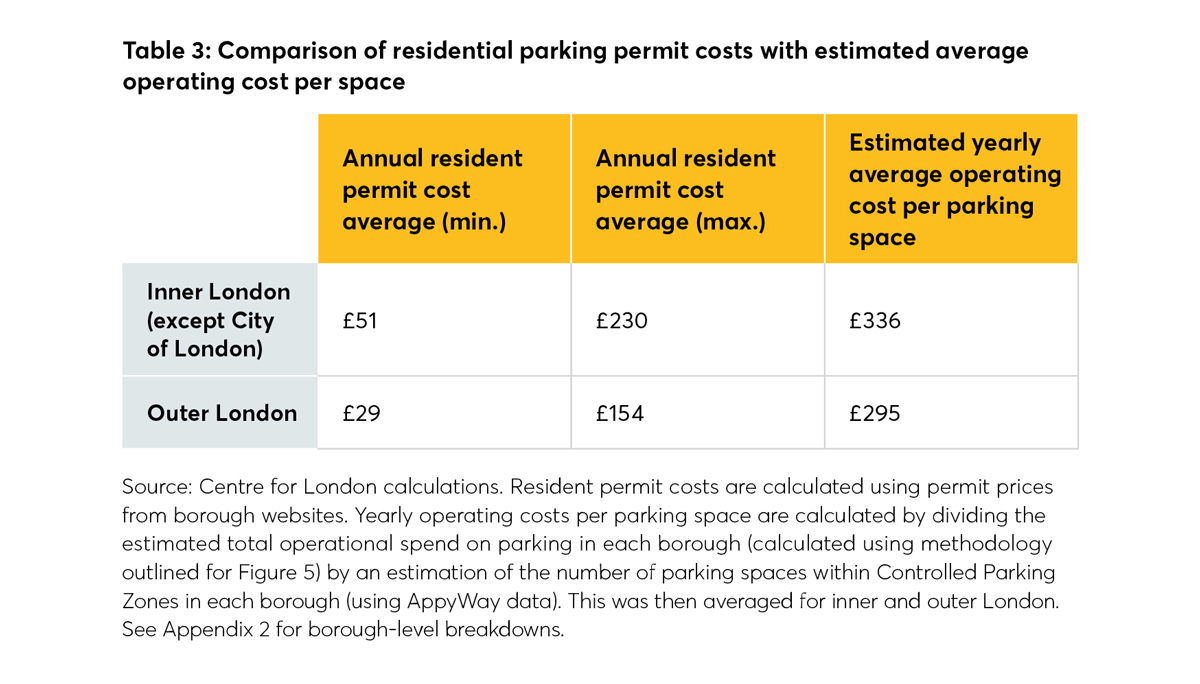 Given that revenue from resident permits do not cover boroughs’ costs, the source of borough parking surpluses tend to come from short-stay parking and enforcement income instead.

Further, when resident permit costs are compared with the market value of parking, there is a clear discrepancy. Peer-to-peer rental of parking spaces through online platforms like JustPark cost almost ten times more than annual residential parking permits (Table 2). This suggests that London boroughs are selling their residential parking permits at a price that is a great deal lower than on the open market.

Evidently charges for residential parking permits are not reflective of the true cost of operating on-street parking spaces. This underpricing of residential parking can incentivise car ownership and use, when sustainable choices, such as travelling on foot, or by bike or public transport could be a viable alternative. The rate of car ownership in the capital has fallen by only four per cent in the last 10 years. Meanwhile the proportion of trips made by public transport, walking or cycling in the city remained static over the last three years.

Road transport contributes over 20 per cent of London’s greenhouse gas emissions and to date, 23 London boroughs have declared a climate emergency. It’s therefore clear that the time has come for councils to act more strategically with parking controls and promote alternatives to car ownership and use, to encourage better use of street space and help residents shift to other ways of travelling.

To do this councils should first consider setting residential permit prices at a level that (at minimum) covers the full cost of administration and enforcement, excluding Blue Badge holders. They should also regularly review the coverage, size and operating hours of Controlled Parking Zones. Where CPZs are in place, this would allow boroughs to gradually reallocate road space by introducing a cap on the number of permits issued, using waiting lists for new applications or limiting eligibility for new residents.

On this, boroughs should consider introducing an emission-based charging structure for resident permits, escalating charges for additional vehicles. Or, to shift travel-to-work patterns, implement a Workplace Parking Levy in areas with significant levels of private workplace parking. Boroughs should also consider working with TfL to launch a system of mobility credits that can be used on public transport and private mobility services. This would encourage Londoners to move away from car ownership and use.

London borough leaders might have concerns about local opposition but Londoners want and are ready for these changes. Many London boroughs are already proactively using parking and kerbside interventions to achieve their wider transport objectives, but different boroughs are at different stages of this journey. No council will be able to introduce all of these reforms at once, but phasing in changes incrementally, whilst also being sensitive to local factors, such as public transport provision, will be important to ensure the streets continue to work for everyone. And ultimately, with a climate emergency on our hands, there is no more ‘do nothing’ option.

READ OUR REPORT: Reclaim the kerb

Transporting the Next Million Londoners

Does London Need a Hub Airport?