London is a city of extremes, where wealth and success sit alongside disadvantage and poverty. Although the city has boomed in recent decades, the gap between the city’s richest and poorest residents is widening. Living standards have fallen. And there are stark inequalities in health and education too.

As an increasing number of Londoners struggle in the city, charities and the wider third sector are expected to step up to the plate. But while London is in many ways a hub for the nation’s third sector – attracting social entrepreneurs, young charity workers and wealthy philanthropists alike – most London boroughs, especially those in outer London, have seen a decline in the number of their local charities as the number of residents living in poverty rises. 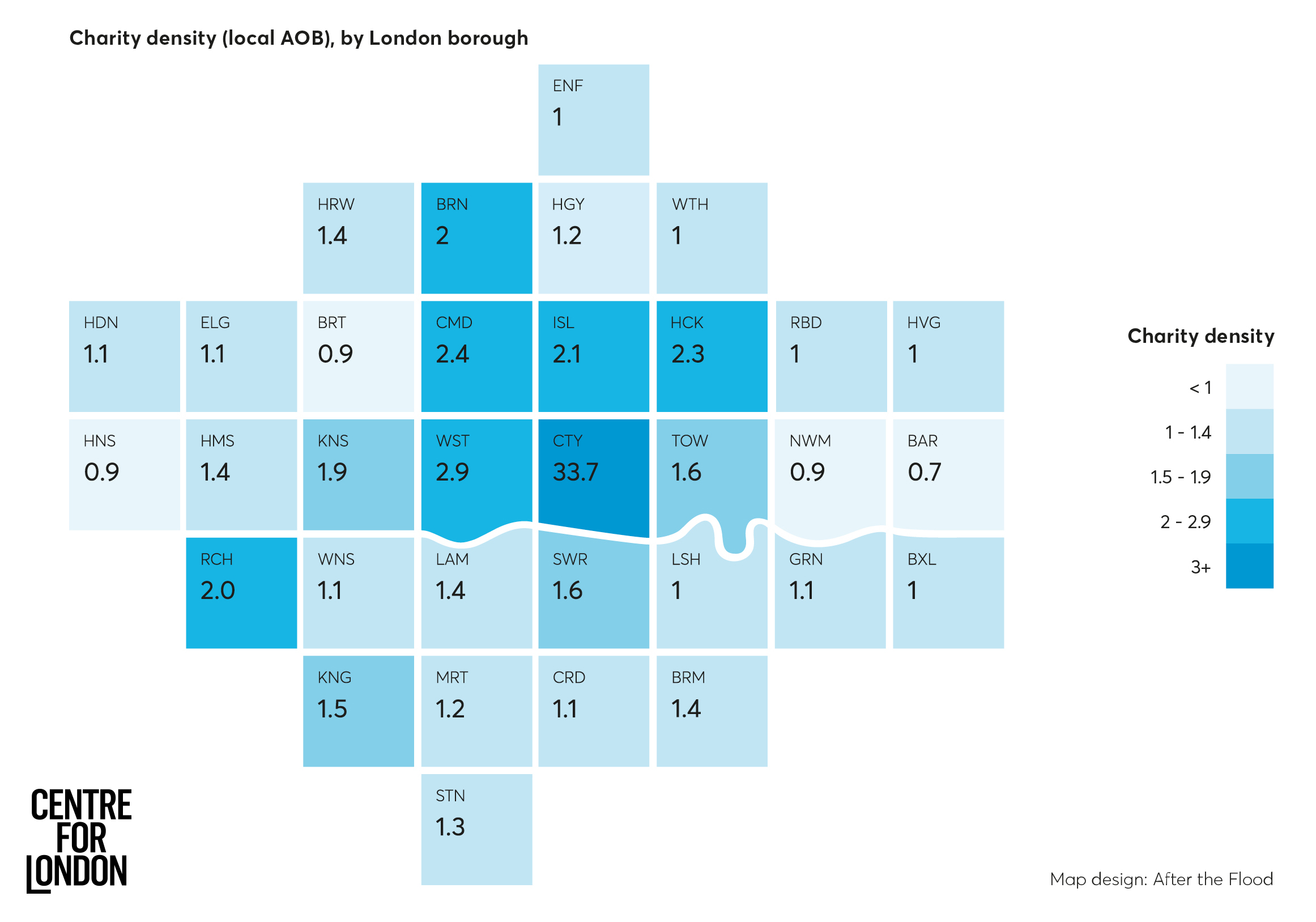 Worryingly, this has gone hand-in-hand with a drop in giving and volunteering by ordinary Londoners. While the city’s residents rally in times of disaster – such as the Grenfell Tower fire – the proportion of Londoners who regularly donate to charity has declined by eight per cent over the last five years, from 81 per cent in 2013-14 to 73 per cent in 2017-18. While a large number of Londoners give through work – corporate philanthropy is growing – employers too often work in isolation. To take one example, much corporate giving has focused on central locations, close to the City and Canary Wharf. This can make it even more difficult for charities further out of the city to attract their support. 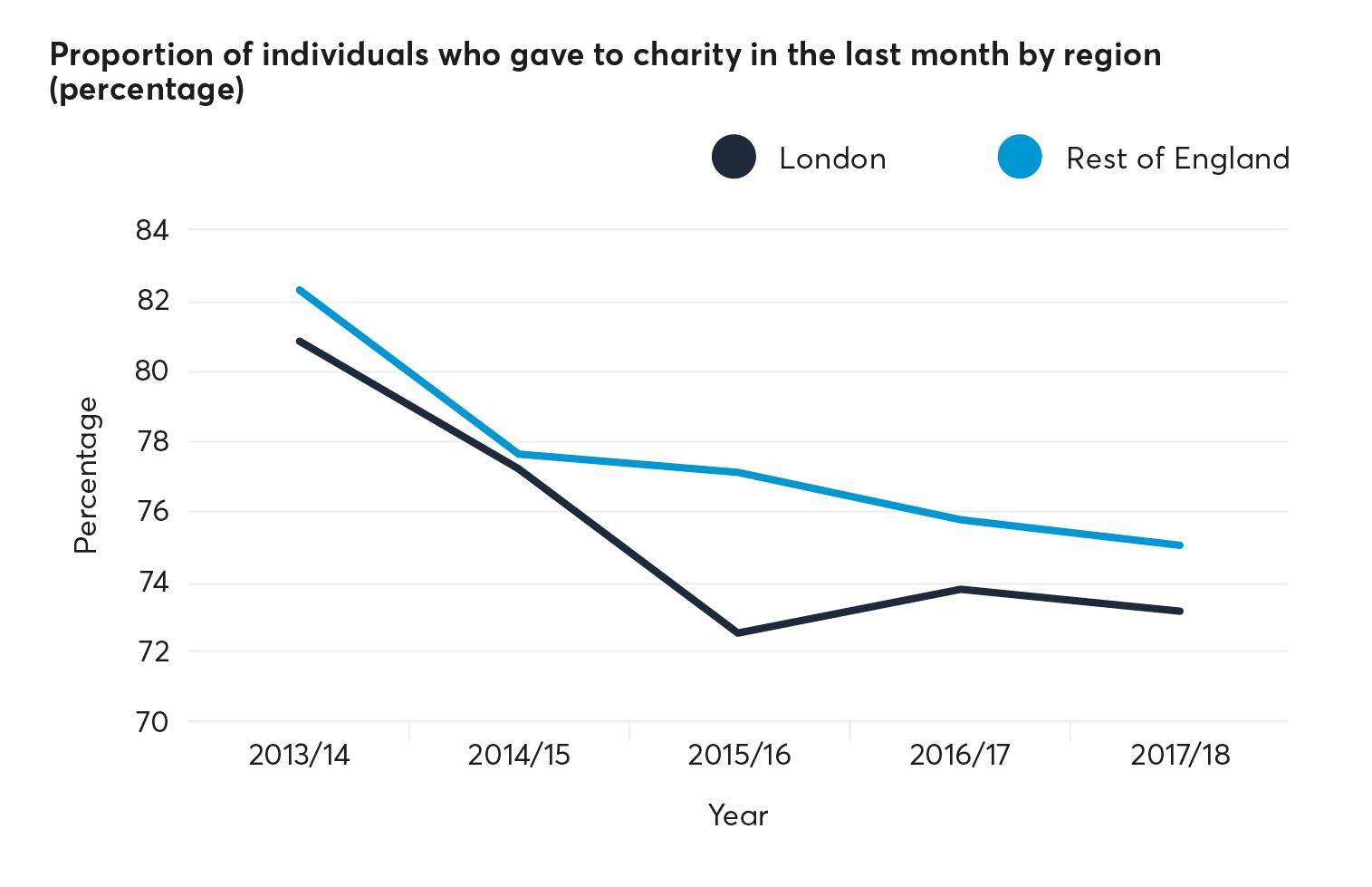 There is also a disconnect between the growing number of millionaires – those who have benefitted from the city’s success – and their engagement with philanthropy focused on London’s causes. Collectively, London’s millionaires give in the region of £1 to £1.5 billion annually, but the mean donation of those with assets over £10 million has been calculated as just £240 per year!

Against this backdrop London’s giving leaders – the Mayor of London, and organisations such as London Funders, London Councils and City of London Corporation – need to take urgent action. We need a city-wide approach to encourage and coordinate giving to London causes across the capital.

There are five areas for urgent action:

Building up a picture of need in London would help to direct money and time towards the communities and causes that need it most. Many will have seen Trust for London’s Poverty Profile – this could be expanded to include very localised information, as well as a wider range of issues, such as the environment and crime, helping those who can give to identify where need is greatest and prioritise accordingly.

Londoners’ generosity has been best expressed around a particular event or cause. London’s giving leaders should establish an annual London giving day, focused on a key issue each year for Londoners to support. It should have high profile support from the Mayor and local politicians, with a targeted ask towards wealthy Londoners around giving back to the capital.

Major London funding organisations – foundations, local authorities and corporates – should be encouraged to provide greater transparency on grant data by publishing on 360Giving. By developing a better understanding of who is giving what, and where donations of time and money are going, we can establish how these can be more effectively directed.

Public spending cuts have often hit smaller charities hardest. Many smaller organisations, lack the fundraising expertise and capacity to raise the income they need. London civic leaders should help SME charities to build up their fundraising capacity, with funded advice and training programmes.

London-based social investors have at times struggled to find investible opportunities in the capital. While there are numerous hubs for social enterprises across the capital, a physical space which could act as a centre for philanthropy, social investment and enterprise could bring together philanthropists, investors, investees, and support organisations.

London has long been the national capital of giving, home to 18 per cent of English charities and 47 per cent of all English charitable income. But despite being the hub for national and international charities, there seems to be a disconnect between the charitable activity that takes place in the city and the increasing need amongst ordinary Londoners. By working together, to give more and give better, we can ensure that Londoners who are struggling, receive the support they need.

More, better, together: A strategic review of giving in London

More, better, together: A strategic review of giving in London